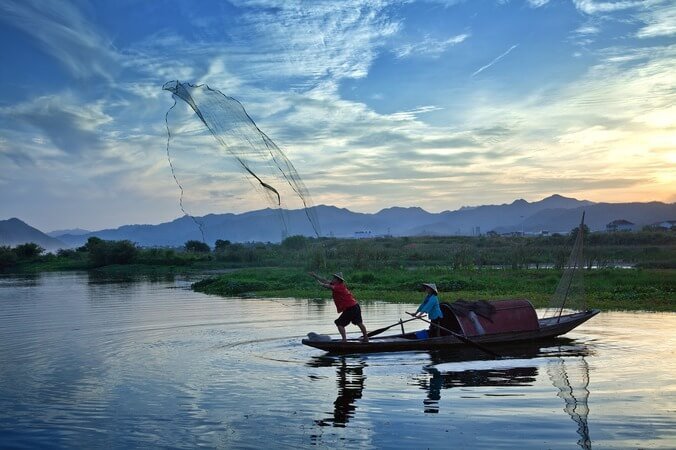 From the Bible, we see that Yeshua instructed Kefa on two occasions to cast his net into the water to catch fish. The first of which happened at the beginning of Yeshua’s ministry – Luke 5 – and the second, after He was resurrected from the dead – John 21. In Luke 5, the LORD asked Kefa to let out into the deep waters and let down his net after he had toiled unsuccessfully all night. However, in John 21, Yeshua specifically asked Kefa to cast His net to starboard – or the right side. Hence, we will focus on the account of John 21 as the LORD was speaking specifically to me about that account.

In John 21, we find Kefa making a decision to abandon his calling and return to what he knew what to do best – fishing. After all, the disciples’ hope of witnessing the Mashiach ruling and reigning in their lifetime appeared to have been dashed by the death of Yeshua on the cross. It is, however, recorded that Kefa and the other disciples who got onboard with his brilliant idea worked through the night without a single catch. Verse 4 records that, as the day was breaking, Yeshua stood on the shore asking them for fish. They replied that they had caught nothing.  Yeshua then instructs them to cast their nets to starboard to bring in a catch.

Before going any further, it is important to note that at this point in the narrative, the disciples had not yet recognized that it was the LORD instructing them to do these things. This got me thinking about what my reaction would have been towards a stranger instructing me on how to perform a task at which I consider myself to be quite proficient, despite some rustiness. Most likely, I would have balked at those instructions and told the fella that I knew what I was doing, even though I had caught nothing. Perhaps, I would have chalked it all up to global warming or climate change. However, we see the humility of the disciples and their willingness to take instructions. May God give us the grace to be humble and teachable as God doesn’t despise a broken and a contrite heart.

Kefa and the other disciples obeyed, and the outcome was that they couldn’t haul the enormous catch into the boat. There was a miraculous provision of fish at their obedience – praise God! It is interesting that, despite the fact that Kefa had found himself in a similar situation at the beginning of Yeshua’s ministry on earth, it was Yochanan – the disciple whom Yeshua loved – who first recognized the LORD. I believe this testifies of the level of relationship they each had with the LORD. The closer we cultivate our relationship with the LORD, the easier it becomes to recognize the Him in any situation.

The most important lesson of this story is the fact that the disciples needed to enter into God’s rest to be able to catch that haul. You may wonder what any of their actions have to do with entering into God’s rest. We must first realize that they had toiled all night and were unsuccessful in catching any fish. We then see that they listened to and instantly obeyed the instruction of the LORD to cast their net to the starboard. They had to cease from their way of doing things, from their attitudes of “this is how we have always done things” or “this is how tradition dictates that we do things,” and choose to hear and obey the voice of the LORD at the moment. They had to become humble and teachable and admit their shortcomings and inability to catch any fish in their strength. Likewise, the degree to which we are able to enter His rest is directly correlated to our level of humility and willingness to listen to and obey the voice of the LORD. As we enter His rest and align ourselves with His will for our lives, we become fruitful and able to accomplish the good works He has preordained for us to accomplish before the foundation of the world (John 15 v 5, Ephesians 2 v 10).